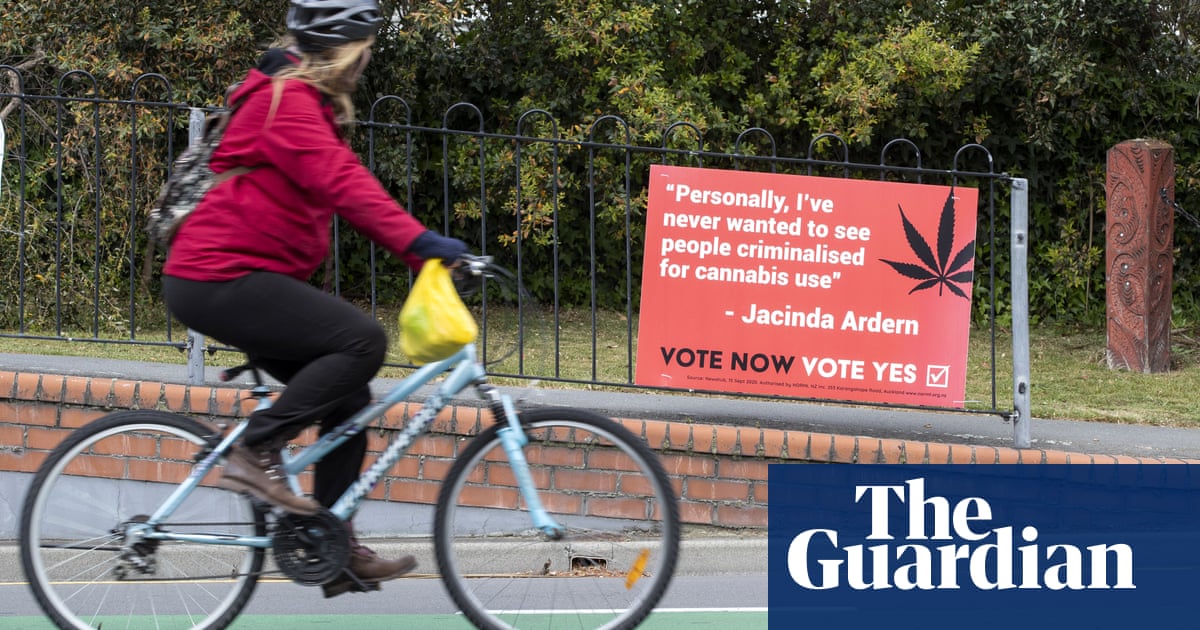 The results of New Zealand’s referendums on whether to legalise cannabis and euthanasia will be released this week, with campaigners nervous that the upheavals of 2020 could have tilted the vote to the status quo.

Political experts say that in years of unrest and instability voters tend to veer towards keeping things as they are, which could affect the likelihood of both referendum questions passing.

The questions appeared on the general election ballot papers, but results will not be released by the electoral commission until Friday.

Polling throughout 2020 has shown strong public support of between 60-70% to legalise euthanasia and it also has the backing of the prime minister, Jacinda Ardern, as well as the opposition National party leader, Judith Collins.

But Matt Vickers, the widower of lawyer and euthanasia campaigner Lecretia Seales, said he was feeling nervous ahead of the result.

Seales died in 2015 of a brain tumour. Until her death, she and her husband fought to make assisted dying legal in New Zealand, as it is in the Netherlands, Belgium, Canada, the Australian state of Victoria and some states in the US.

“I am feeling anxious I guess. I am really hopeful we will see a positive result, the polls are certainly looking that way,” said Vickers earlier this month.

“Choice is fundamental to who we are as human beings. When we don’t have choices we feel constrained.”

The End of Life Choice Act 2019 was sponsored by ACT party MP David Seymour. It would allow those with a terminal illness to apply to terminate their life. Although the act has passed through parliament it will only come into force if more than 50% of voters tick “yes”.

The act outlines criteria for who can apply to end their life, including that they be aged 18 or over, are New Zealand citizens, are suffering from a terminal illness that will end their life within six months, “have a significant and ongoing decline in physical capability”, are “enduring unbearable suffering that cannot be eased” and are in a position to make an “informed decision” about their death.

Those suffering mental illness or decline would not be eligible, nor would those applying solely on the basis of “advanced age” or a disability. Two doctors – one independent – would have to sign off on the decision, with a psychiatrist called in if either doctor has any doubts.

If the euthanasia referendum passes, it is binding and would come into effect in October 2021.

The cannabis referendum, however, is non-binding, and polls leading up to the election showed a country divided.

Voters have been asked to decide whether they want to pass a bill that would legalise cannabis and regulate how it is used and sold. This would include producing and selling fresh and dried cannabis, including plants and seeds – for people over 20 years old. The change would impose more stringent restrictions than the rules around sales of alcohol and tobacco.

A One News Colmar Brunton poll in February found 51% of people intended to vote against legalising cannabis, with 39% voting to allow it. The rest of the 1,000 people polled said they would opt out of voting or didn’t know what they would choose.

Importantly, more than 50% of voters need to say yes to the law change for it to be considered by parliament.

Andrew Geddis, a law professor at the University of Otago, said while there was no legal imperative for an incoming government to abide by the referendum result, it would be “pretty hard for them not to act” on a strong majority yes vote.

Ardern has repeatedly refused to state her position on cannabis but said she would let the public know how she had voted once the results were released.

Ardern recently said she has used cannabis “ a very long time ago”.

“Clearly, the prospect of invoking criminal sanctions has had little impact on people’s behaviour,” Clark wrote in a recent opinion piece for the Guardian.

“Evidence from longitudinal studies carried out in New Zealand indicates that by the age of 25, 80% of New Zealanders will have tried cannabis at least once. Put simply, prohibition-based policy approaches have not eradicated and will not eradicate cannabis consumption and supply in New Zealand or anywhere else where its use is established.”

Prof Michael Baker, an epidemiologist from the University of Otago who has worked on the country’s successful Covid-19 response, said New Zealand has proven itself a world leader in utilising “innovative and evidence-informed approaches” to complex public health problems and should apply the same pragmatic lens to cannabis.

“Our prohibition model for cannabis is outdated and doesn’t work. Supporting law reform is about reframing cannabis use as a health issue which opens up new, more effective ways of minimising harms caused by this drug.”

Cannabis is New Zealand’s most commonly used illicit drug, and the latest New Zealand Health Survey found that 15%, or 590,000 New Zealand adults used cannabis in the past 12 months.

Māori account for 16% of New Zealand’s population and are shown to be disproportionately affected by New Zealand’s drug laws, facing three times as many arrests and prosecutions for possession of cannabis than non-Māori.

Professor Papaarangi Reid, the head of the department of Māori health at the University of Auckland, argues that legalisation would help control the potency of the drug, its price and make it less accessible to young people.

“We’re particularly concerned that Māori have borne the brunt of biased enforcement and the negative health effects of illegal cannabis,” said Reid.